How did Brexit come about and what are the latest developments? How has Ireland's past shaped the present? How does the UK political system work? These are just a few of the topics I give talks on for students in Years 10 upwards, either online or in person.

And if you're looking for something else, please do get in contact.

THE UK & BREXIT
Over three years of misinformation, disinformation and negotiations. In this talk, we'll be looking back at what was behind the Referendum, what issues were at stake, and how the British, especially  young people, responded  to this landmark vote. How has Brexit divided the country and what does it mean for the different regions of the UK? The talk contains a wealth of different materials – including cartoons, infographics, photographs and short videos – to help students get a clearer picture of the implications.

WHAT STUDENTS HAVE SAID:
"I was afraid it would be rather one-sided pro-Brexit or anti-Brexit. That was definitely not the case. The talk was very balanced."

"I could understand what she said. She explained the words we did not know."

"I liked that Louise talked about the role of the media before the referendum. I was surprised that they had such a big influence."

"I also really appreciated you also talking about the view of young people on the subject, which of course makes it even more relatable and more interesting." 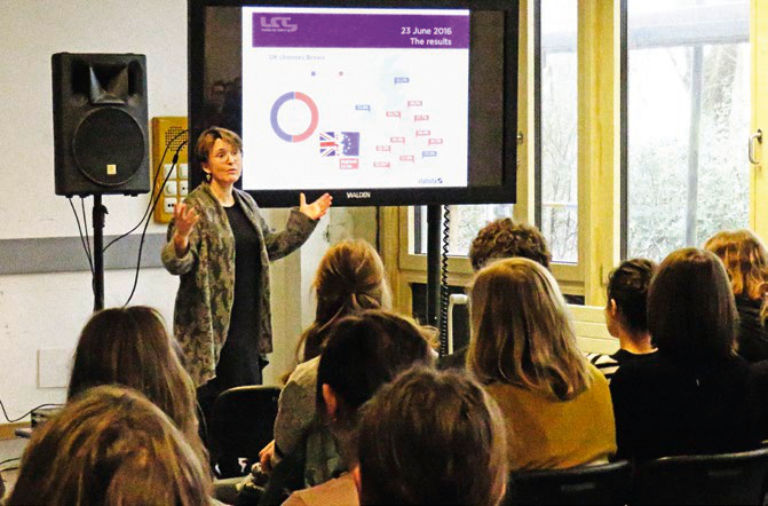 Witches, magic and ... Shakespeare
A workshop for students in Years 8 upwards

The aim of this workshop is to get the students speaking and acting (lots of moving) and to think about different ways words and phrases can be spoken. At the same time, it gives the students a playful first introduction to Shakespeare and takes away (some of) their fear!
The workshop is three-and-a-half hours with breaks and is organised as follows:

THE UK & IRELAND - a troubled past
In this talk we look at the reasons why Northern Ireland was so pivotal in the Brexit process. Why do the Irish and the British have such a troubled past? We'll be looking at important figures in Irish history as well key events such as "The Great Famine", the Home Rule Movement, the Easter Rising, the division of Ireland, the Good Friday Agreement and how politicians are striving to avoid a return to the Troubles that cast a shadow over the 20th century. And what might the future hold for the Republic of Ireland and Northern Ireland?

All abouT UK Politics

What's the difference between government and Parliament? What role does the judiciary play? Which political parties wield the most clout? Which matters are devolved from Westminster in Northern Ireland Scotland and Wales? And how has Brexit shaped UK politics in recent years?

This talk contains varied materials – including cartoons, infographics, photographs and short videos – to help students get a clearer picture of what the political system is all about.